Everything you need to know about New Mexico Red and Green!

The world has discovered what we've known all along here in New Mexico ...chile is habit-forming! Whether enjoying dishes made with pungent green chile or mellow dried red peppers, we're hooked! And while the same ingredient in chile that supposedly makes it slightly habit-forming (capsaicin) is also the one that may burn your tongue, it's the delicious variety of flavors in chile cuisine that we love, not just the heat. For our purposes here, we're not going to explore Jalapenos, Habaneros, Cayenne, or the multitude of other peppers preferred mainly for their heat. When we say "Chile", we'll be talking about the long New Mexico Green/Red types, with names like "Big Jim", "Rio Grande","Sandia", etc. In other parts of the country you'll see similar (but not quite the same!) chile peppers called "Anaheim" peppers. In our neck of the woods, it's "Hatch" or "Mesilla Valley" chile that we crave. (By the way, for a brief treatise on various names used to market chile, go   HERE.)

Two Great Chiles - Both From The Same Plant!

The heat in a chile pepper comes from a chemical called Capsaicin, concentrated in the membranes surrounding the seeds, and extending down the pepper like "veins". The heat can be somewhat reduced by removing the membranes and seeds. Green chile is rich in Vitamin C.
The green pods are normally roasted so the tough skins can be removed. The roasting process also imparts the delicious flavor and aroma that we love! See the video below for instructions on roasting chile at home.

By Summer's end the green pods are ripening and turning to a rich, deep red color. The chile flavor is changing also, becoming sweet and mellow, with a completely different taste from the green peppers. Some of the fresh red pods are picked and tied into the colorful Ristras you'll see hanging all over Southern New Mexico this time of year, but they're not just pretty to look at. Once the peppers are dried they become the starting point for the rich red chile sauce used in a multitude of red chile recipes.The video below will show you how!

LEARN HOW TO ROAST GREEN CHILE AT HOME, AND HOW TO USE DRIED RED CHILE PODS IN THE FOLLOWING VIDEOS ON OUR YOUTUBE CHANNEL.

Chile peppers are grown all over New Mexico, but the major commercial production is in the Southern part of the state, concentrated roughly along what we've dubbed "The Chile Trail" shown at right. Traveling from west to east, you pass through Hidalgo, Luna, and Dona Ana counties, the state's three largest chile producers. Make a jaunt up to Hatch, the "Chile Capital of the World". Heading east, enjoy the desert and mountain scenery from Las Cruces to Artesia, but there's not much chile growing on that leg of the trip. Then from Artesia eastward you'll pass through Eddy and Lea counties, two more fairly large producers. After that, you're in Texas, where it's strictly "Chili"...with an "i", a whole different story! 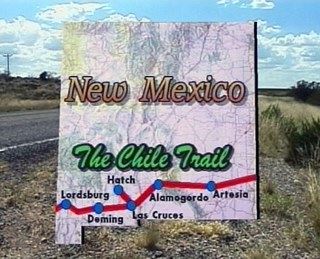 Okay, what's the difference between "Chile" (with an "e"), and "Chili" (with an "i")? Order "chile" in New Mexico and the immediate response is usually "Red or Green?" Chile as we know it here is a variety of dishes where the major ingredient is either fresh green chile, or a sauce made from rehydrated dry red chile pods. Don't get us wrong...we occasionally enjoy a "good steamin' bowl of Chili", but we've come to demand much more than ground beef, beans, and cheese of our Chile!

FOR MORE INFORMATION ABOUT NEW MEXICO CHILE, WE RECOMMEND:
The Chile Pepper Institute - Maintained by the New Mexico State University College of Agriculture and Home Economics, this site contains a wealth of interesting information.

Looking for New Mexico Chile Recipes?
Check out our "Tale of Two Chiles" Cookbook .
In the meantime, here are a few recipes to whet your appetite:

SEE US ON FACEBOOK FOR ADDITIONAL ITEMS OF INTEREST TO CHILE LOVERS!!