Another perfect winter day in Southern New Mexico....warm sun, blue sky. In the distance a glimpse of snow-capped mountain peaks, but here the only white we see are thousands of white-as-snow geese. We're at the Bosque del Apache National Wildlife Refuge, situated near the banks of the Rio Grande river, about midway between Las Cruces and Albuquerque. 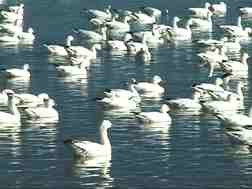 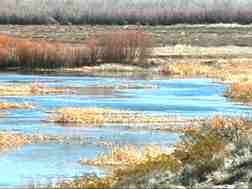 Marshes are flooded in November in preparation for the arrival of the migrating birds.
Bosque del Apache contains about 57,000 acres, 13,000 of which are wetlands, and the remainder wooded areas and grain fields which provide food and cover for migratory birds. The Bosque is managed by the U.S. Fish and Wildlife Service, and is one of more than 500 such refuges in North America. These refuges exist to provide a safe haven where birds migrating from thousands of miles to the north may spend the winter, feeding and replenishing their body fat in preparation for the long journey back to their breeding and nesting grounds. 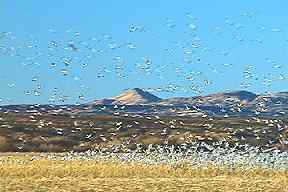 Noisy flights of Snow Geese and Sandhill Cranes alight in the grain fields for another day of feeding. Local farmers help the U.S. Fish and Wildlife Service plant corn and other grain crops to sustain the birds through the winter.
Up to 50,000 geese and up to 17,000 cranes repeat a fascinating ritual every day. At sunrise, they rise in noisy flight from the ponds and marshes where they've spent the night safe from predators. They fly to the grain fields, where they feed almost continuously all day, occasionally lifting up in chaotic mass flights when frightened by something. Then as sunset approaches, they return to the ponds for the night. The process repeats day-in, day-out, from mid-November when birds first start to arrive, until around the first of March when the last of them have headed back north.

The Sandhill Crane is 3-4 feet tall, with a wingspan up to 6 feet. They breed in Canada, Alaska, and Siberia. Once almost extinct, they have recovered dramatically because of safe refuges like the Bosque. 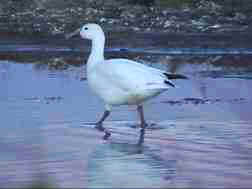 Snow Geese weigh 6-7 pounds. Most come from Northern Canada, flying up to 1500 miles, cruising at up to 40 miles per hour. These birds mate for life, and are sometimes accompanied by their young when they migrate.
The best times to visit the Bosque are mid-November through mid-February. A small fee entitles the visitor to spend all day exploring. The auto loop tour takes you close to the grain fields and the marshes. Stay until the sun sets, to see the amazing exodus of the birds from the fields to the marshes, as well as a breathtaking New Mexico sunset! 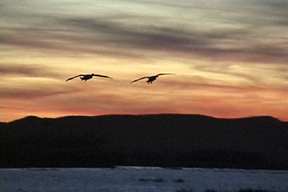 Two final stragglers prepare to settle onto a pond for the Night.
After a long day at the Bosque, head up the road to nearby San Antonio, NM, to the Owl Bar and Cafe. Local legend has it that the New Mexico favorite, the Green Chile Cheeseburger, was invented here. We don't know about that, but
we can say that it was worth the trip! 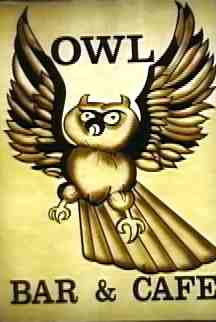 Here's a short video we made on our last visit to the Bosque.